I "finished" the Kids In Touch app over the weekend and did some UX testing with 6 family members that had never seen it. This was not a fun process. The testers found so many problems and had trouble with so many aspects I thought would be second nature to smartphone users. Yes, I should do UX testing before, during, and after, but... that's hard to do with a one man shop.

As this is my first ever consumer facing app, I wasn't used to all the problems. In my enterprise career, experienced, technically oriented users were able to use browser based apps with relative ease. The consumer world is quite different.

My UX testing group consisted of:

If you've come this far, thanks. If you don't care about Ionic Framework, you can move along now.

All of this testing brought out quite a few issues with my overall UX and Ionic components in particular. Some of these might be due to my less than great coding skills. Some are due to general issues with Ionic. I'll document a few here to hopefully help others out.

Modals : I love modals. I used them in forms to show the content of Privacy Policies when links were tapped. Modals were also used to show login screens.

There were so many problems with modals. I've been testing the app throughout development and have experienced a few examples of modals sticking or not being able to close. During testing, every user was able to lock a modal in place and essentially kill the app. The modals could not close or could not re-oepen. It was astounding how often this happened. When I'd take the phone and try to recreate it, I could not. I'd give the phone back to a user and they'd lock it up again immediately.

I'm removing all the modals from the app. Instead of modals, the links will take them to a new view, they can read the info or do whatever, and then use a back button or inline button to go back.

I "think" the biggest problem might be from inexperienced iOS users. One in particular would "long press" every interface element. If there was the slightest delay, she'd long press over and over. 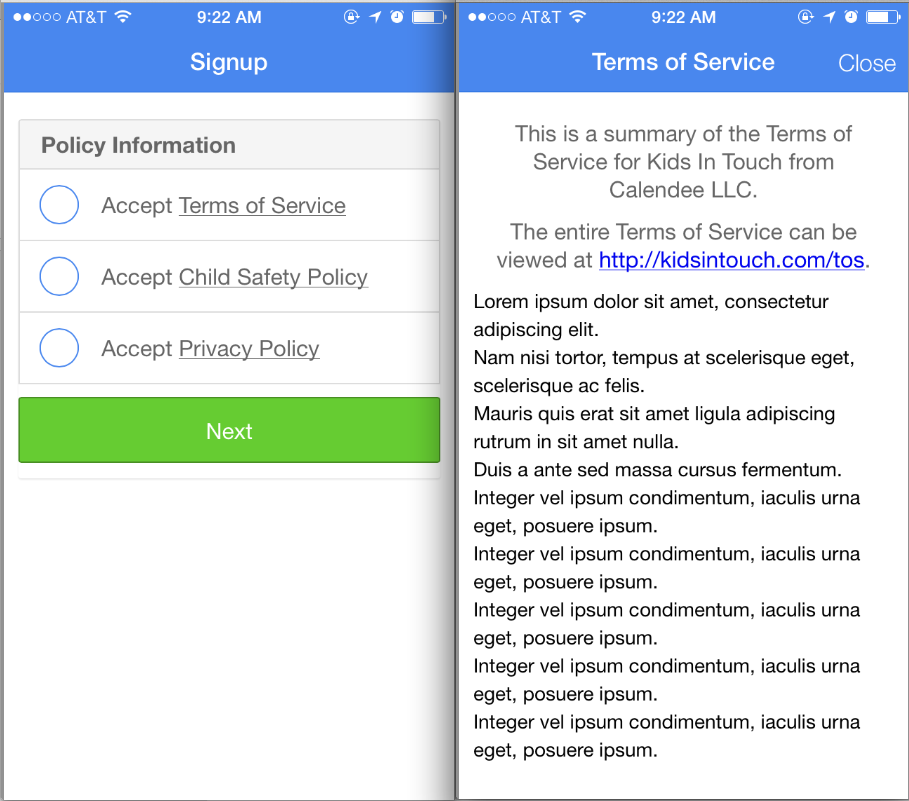 Toggles : I don't see toggles in use much in iOS apps. The "Airplane Mode" setting in iOS is the most common one I can think of. With the native toggle, you can tap it or drag it to activate.

With Ionic, you tap a toggle to transition it. For my users, toggles were a nightmare. All of my users were expecting to drag the toggle. I watched them over and over trying to do this. They were literally getting angry over it. Just one or two finally realized they could just tap it. The other testers either asked me or another user for help. Some just skipped the toggle completely after getting frustrated and classified themselves as "kids" instead of "parents".

I'll be removing the toggles and replacing with checkboxes or radios. I think all this dragging over and over caused too many touch events that locked devices up or caused weird text selection issues.

Notification Bubbles : Right now, Ionic doesn't have notification bubbles in many elements. I think list items are the only Ionic element that has them. For my app, I needed them on tabs. Without the bubbles, my users wouldn't even casually explore another tab. When they'd navigate to a page with a tab, they'd stay on the first tab. Not a single user went to another tab without me telling them to do so. The bubbles would have helped do two things:

Tabs : See "Notification Bubbles". I was really surprised by my users' lack of experience with tabs. I'm going to seriously reconsider using tabs at all. On my new "Home" screen that will replace the side menu, I think I'll have discrete views for what was previously one view inside 3 tabs.

Side Menu : This was quite a painful point. Due to some mistakes with the UX, the users needed to get to the menu immediately after logging in. Even the adult, experienced users just didn't understand when/why to use the menu. They'd stare at a screen wondering how to do what they needed to do. The kids had no trouble at all with menus.

Because of this, I'm actually going to remove the menu completely. I think a home screen with "menu" type items makes more sense for this app. If my users were so confused by needing to access a menu, your users might be confused as well. Of course every app is different and every audience is different; so, menus certainly have a place in many apps.

Clearly, my first stab at this consumer app left a lot lacking. I've got to improve my UX skills and get an interface that is more intuitive. I'll be working this out over the next week or two and take another stab at it. Hopefully, this info will help out other novice developers.

Today's #BigDOCC meetup was at the Flying Horse Cafe in the Magnolia hotel in downtown Dallas. The ceiling in the Magnolia lobby / elevator area was really cool. Did anyone else notice that? The meeting today was much smaller than last week's. Maybe 10 to

Today I attended my first #BigDOCC meetup this morning at Coffee House Cafe. The meeting was huge. I'd say about 40 people attended. I'd like to thank the Coffee House Cafe for hosting us. The conversations ranged from local tech news, startups, BitCoin, and