I'm going to throw out my initial impressions of the new Motorola Moto E.

Disclaimers : I've been using Apple products exclusively for nearly 10 years. I gave up on Windows 10 years ago and have about 5 hours of experience in using Android devices. I am also a bit of a privacy nut and am generally not a fan of Google. I'm not an Apple "fanboy", but this will not be an unbiased review. It's simply an overview of my impressions after less than 20 minutes of use. If you don't like that, please move along.

Semi-Obnoxious Ad : If you need a messaging app for your young kids, please consider Kids In Touch.

So this tiny phone showed up in this giant box. This really is no reflection on the phone, but I just don't see why was this not packaged more appropriately? 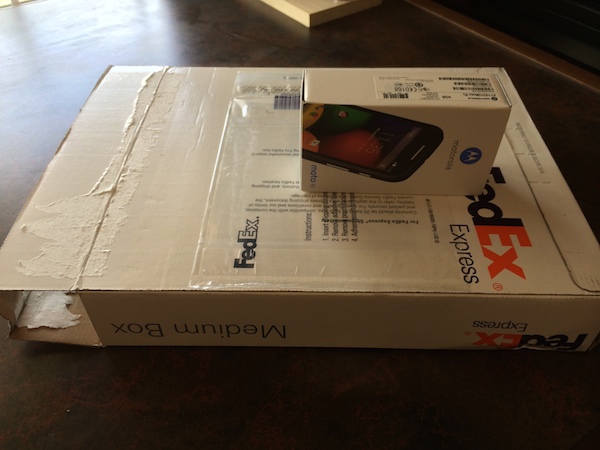 My first real complaint is with the power adapter. Of course the phone uses MicroUSB for charging. 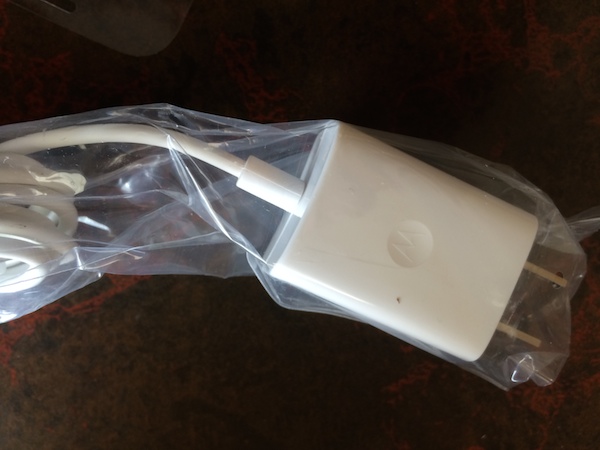 Unfortunately, the provided adapter has a fixed cord; so, you can't use it with any other source like a computer or USB wall outlet. How much would this have added to the cost of the device? Maybe .50¢? If you need to charge from a computer or USB battery pack, you'll need to buy another MicroUSB cable. Can you imagine the outrage if Apple shipped a wall adapter that only worked on the wall and required your to spend more money on a Lightning compatible cord for your computer?

Now, on to the actual phone. Once I got the protective cover off the screen, I was impressed. The backing is plastic, but it feels really good. It has some tactile texture to it instead of a cheap, slick plastic feel. It's also a nice curved shape. The screen appears to be almost the same size as my iPhone 5S. However, this is not really the case as a portion of that screen is devoted to the Home, Back and ??Menu?? button. So, it has less usable screen real estate.

The screen is pretty nice too. I'm no "retina" quality afficianado. I honestly don't notice the difference of screen quality when using devices on a daily basis. If I put a retina capable iDevice against a non-retina one, I do notice the difference. If I just pick up the Moto E and use it; I don't think, "wow, this is better" or "wow, this is worse". I did notice one problem with the actual glass. It seems to catch my finger as I move. If my fingers are even slightly "humid", my finger stutters across the screen instead of gliding across it.

I'm also not a fan of the power button being on the side of the phone near the volume rocker switch. I hold a phone with my thumb riding up the right hand side. Several times, I've managed to lock the screen by just tightening my grip. I really prefer the power/lock switch at the top of the device - out of the way.

The feel of the phone is pretty good. Prior to using an iPhone, my only experience was with plasticy, junky Nokias and Sony/Ericsons. With those, if I picked them up, they literally squeaked. This phone is solid without being heavy. It fits well in my hand. I like it.

A few weeks ago, I got a "free" (on contract) HTC One M8 from AT&T. This was my first experience with a carrier provided phone in about 6 years. Yuck. The physical device was nice. The carrier bloatware was a nightmare. There were so many useless apps preinstalled. Of course, most of them could not be removed. I was so disgusted by it all that I could not like the phone. It may have been wonderful, but I was so pissed off by them ruining MY phone that I returned it.

This Moto E was free of all that carrier garbage. Glorious. Yes, it is littered with Google apps. Guess what, the iPhone has many Apple apps as well. Fortunately, these Google apps are pretty unintrusive. You can just remove the few from your home screen(s).

While dabbling with the phone, I noticed that the tap detection is just a bit off. For example, while using Chrome, tapping in the address bar frequently does nothing the first one or two times. Finally, I can hit the address bar and bring up the keyboard. If a URL is already in the address bar, hitting the "X" on the right hand side is pretty difficult too.

My main complaint with the phone is more about Android. By default, the OS asks you to buy into everything Google. Location, mail, messages, Now, .... The list goes on. I wasn't thrilled with having to turn off all this stuff or being constantly asked about it. When trying to keep Google from having access to my location info, it's really hard to tell if they can or cannot get access. If I turn on Location, the "Google Location Reporting" appears all the time. If I tap that, I then get a notification saying I turned it off before and offering to turn it on again. All in all, I had to wander all over the settings "app" to turn off everything I could find that I'm opposed to. In this, Apple does a much better job.

There also doesn't appear to be a way to search for apps on the device. For example, I was looking for a compass or GPS. I can't find any such app. Maybe there is no preinstalled app? It'd be nice to search for one. Perhaps there is a way but my limited Android experience keeps me from finding it.

The "status bar". This thing is pretty funny. There can be 5 to 15 little icons on the top of the screen. I have no clue what any of them mean.

FM Radio : Until the HTC One experience, I had no idea that Android devices has FM Radio tuners. That's pretty cool. The app uses your headphones as an antenna and scans stations for you. It does a pretty decent job. However, I never listen to FM radio as I live too far out and got very few stations. This might be of great value to others though. I did try to manually tune to a particular station by dragging the pointer on the frequency band. This is a terrible UX pattern. With the stuttering drag on the screen problem, it's impossible to fine tune to any given frequency.

This is where the Moto E really shines. To enable Android development, I had to do the strange Settings->About Phone and then do the 7 taps on the "Build" list item. After that, I plugged it in and it just worked. "adb devices -l" magically listed the device.

This was a far cry from the HTC One experience. I had ended up having to completely reset the phone to get it to work properly. This was after trying to install the HTC Sync Manager app on my Mac that turned out to be useless. Not to mention the fact that Sync Manager magically made itself an "autorun" app in a non-Apple way. I was quite disgusted by that.

I tried a few different sample Ionic Framework apps on the Moto E and they all performed flawlessly. The animations are pretty smooth and the experience just works.

Overall, I'm pretty pleased with the device. It's not a "high end" phone. I needed a development phone that was more inline with the customers that will be using some apps I'm working on. Despite this, it seems to be a good quality phone. It's perfect for my needs and would easily work well as a phone for someone on a low budget or as a starter phone for a teenager.

If you are looking for a higher-end phone that might support 4G LTE, Motorola has you covered there as well with the Moto G or Moto X. 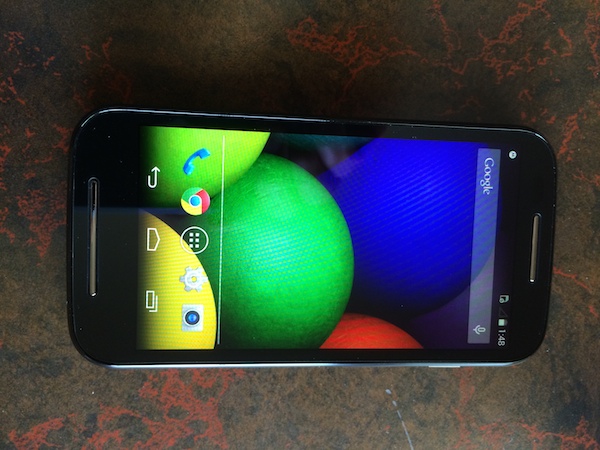 If your Hapi.js server is using the Good Plugin for operations logs, you might want to know how to throttle the output. By default, Good spits out logs every 15 seconds. I really didn't need ops info that frequently. Semi-Obnoxious Ad : If you

I've spent the last 20 minutes trying to figure out why my AngularJS directive was not working. Here's a sample of the directive: .directive("dataFolderItem", [ function() { return { "restrict" : "E", "replace" : true, "template" : "<